The Painter group makes novel observations about the nature and lifetime of qubits within superconducting metamaterials via a microwave electrical circuit. 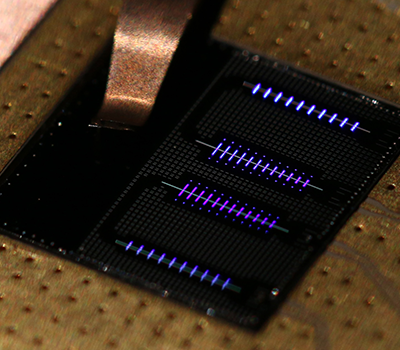 Light is a wave whose electric and magnetic field undulates up and down, with a spatial separation between neighboring peaks (or troughs) corresponding to the wavelength. The way in which light propagates within materials can be strongly influenced not only by bulk material properties, but also by the arrangement and geometric structuring of materials at the sub-wavelength scale. This fact has been known and exploited for quite some time.  In the natural world, these effects can be seen in the beautiful reflected color patterns of a peacock’s feathers.  In our technology driven information age, this concept shows up in the design of lasers that power the backbone of the fiber optic network of the internet.  We call these sub-wavelength structured materials by various names, but perhaps the most descriptive and general is the term “metamaterial”. The metamaterial concept applies not just to optical phenomena, but rather to electromagnetic waves at all frequencies, and is most commonly associated with microwaves like the ones used by your cell phone or wireless network router.

Metamaterials can be used to synthesize an almost magical set of electromagnetic responses, including extreme slowing of the velocity of light, waves which bend (refract) in the `wrong’ direction when passing through an interface of two materials, or beams of light which focus rather than spread (diffract) as they propagate forward. One of the more interesting metamaterial examples is one that creates frequency bands for which light is entirely forbidden from propagation, a so-called photonic bandgap. Photonic bandgap metamaterials give rise to curious behavior – first considered by Sajeev John some 30 years ago – for atoms embedded inside of them which naturally emit light at frequencies within the bandgap. What happens, for instance, to an excited sodium atom which emits yellow light when it is placed inside a metamaterial with a photonic bandgap covering the visible spectrum? John showed that in this case since the atom cannot radiate light, a type of atom-photon bound state forms in which the atom attaches to a surrounding localized “cloud” (wavepacket) corresponding to a single yellow-wavelength photon.

In recent work from Professor Oskar Painter’s lab in Caltech’s Applied Physics department, Mohammad Mirhosseini, along with colleagues Eun Jong Kim, Vinicius Ferreira, Mahmoud Kalaee, Andrew Keller, and Alp Sipahigil, was able to realize a similar atom-photon bound state in a superconducting quantum circuit.  Superconducting quantum circuits represent one of the most exciting prospective technologies for building quantum computers. As their name indicates, they are fashioned from superconducting thin films that are patterned into traces on a microchip substrate like those on a circuit board. These superconducting trace patterns can be used to form resonant elements which oscillate at well-defined frequencies, or to create planar waveguides for transporting electrical signals from one part of the microchip to another. What makes them truly quantum, however, is the introduction of a highly non-linear inductive element called a Josephson junction, which consists of top and bottom superconducting electrodes that sandwich together an atomically thin insulating layer. Shunting a Josephson junction with a capacitor yields a device with two isolated states, like the ground and excited electronic states of an atom that are involved in the emission of light. In the language of quantum computing we call this device a ‘qubit’, since it can be used to store a quantum bit of information.

As described in their paper appearing online in Nature Communications, entitled “Superconducting metamaterials for waveguide quantum electrodynamics,” the Painter team created a metamaterial by stacking together a series of tiny resonators consisting of spiral inductors and finger capacitors, forming a compact microwave photonic bandgap waveguide with a deep sub-wavelength lattice constant (optical image of the chip shown below).  A Josephson junction qubit was placed at one end of the waveguide, and the microwave emission of the qubit was studied as the frequency of emission was tuned across the forbidden bandgap region. Outside of the bandgap the excited qubit was found to rapidly decay, emitting microwave radiation into the metamaterial waveguide as expected. However, as the emission frequency of the qubit was tuned close to the edge of the bandgap frequency, the qubit behavior began to change. In a first effect, the emission frequency was seen to shift more and more from its normal value the closer it approached the band edge. This phenomenon is directly akin to the Lamb shift in atomic physics, first measured in the fine structure of the Hydrogen atom. As described by Hans Bethe, this is a quantum effect related to the frequency-dependent emission and absorption of “virtual” photons by the atom. At the edge of a photonic bandgap one goes from no photon states allowed in the bandgap to allowed photon states just outside of the bandgap, and thus the Lamb shift is anomalously large. Tuned inside the bandgap of the metamaterial waveguide, the measured excited qubit decay rate rapidly slowed. Due to the finite length of the metamaterial waveguide, a second effect was observed. Theoretically, the deeper into the bandgap the qubit emission frequency is tuned, the more localized the attached photon cloud becomes. From subtle changes in the decay rate inside the bandgap the Painter team was able to establish direct signatures of the finite size of the bound photon cloud attached to the qubit.

Besides just the fun of performing fundamental quantum electrodynamics experiments using a microwave electrical circuit that looks like it could have been yanked from your cell phone, the Painter group believes that superconducting metamaterials may play an important role in future quantum computing technologies and in further studies of more complex quantum systems that lie beyond our capability to model using even the most powerful classical computer simulations.  The key – and grand challenge – to unlocking the power and complexity inherent in quantum mechanics theory is to connect vast numbers of qubits together in a structured and organized way while avoiding any unintended coupling to the external environment.  Superconducting metamaterials offer, in principle, a scalable and flexible substrate on which to build complex circuit topologies for interconnecting Josephson junction qubits.  In a sort of qubit hide-and-seek game, not only can one play with the spatial arrangement of the connectivity in a metamaterial, but also the frequency-dependence of the connectivity utilizing bandgaps and narrow transmission bands.

This work was performed as part of a pair of Multi University Research Initiatives from the Air Force Office of Scientific Research (“Quantum Photonic Matter” and “Wiring Quantum Networks with Mechanical Transducers”), and in conjunction with the Institute for Quantum Information and Matter (IQIM), an NSF Physics Frontiers Center with support of the Gordon and Betty Moore Foundation. Fabrication of the superconducting metamaterial devices was performed in the Kavli Nanoscience Institute (KNI) at Caltech.  Mohammad Mirhosseini is a KNI Postdoctoral Fellow, Vinicius Ferreira holds an NSF Graduate Research Fellowship, Andrew Keller is a past IQIM Postdoctoral Scholar, and Alp Sipahigil is a current IQIM Postdoctoral Scholar.