Dr. Chad A. Mirkin (Northwestern University) will give the next KNI Distinguished Seminar on Monday, November 1. 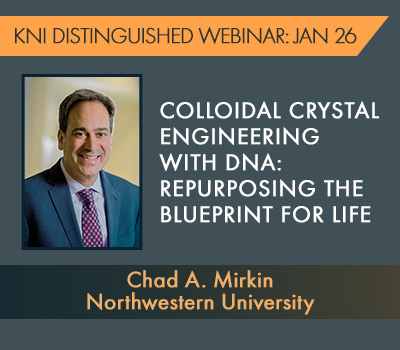 NOTE: This will be a hybrid in-person and online event. The first 25 people to sign up and select in-person will reserve a seat. There will also be the option to join via Zoom.

Registration is required, and more details will be sent out to registrants. RSVP HERE

The materials-by-design approach to the development of functional materials requires new synthetic strategies that allow for material composition and structure to be independently controlled and tuned on demand. Although it is exceedingly difficult to control the complex interactions between atomic and molecular species in such a manner, interactions between nanoscale components can be encoded, independent of the nanoparticle structure and composition, through the ligands attached to their surface. DNA represents a powerful, programmable tool for bottom-up material design. We have shown that DNA and other nucleic acids can be used as highly programmable surface ligands ("bonds") to control the spacing and symmetry of nanoparticle building blocks ("atoms") in structurally sophisticated materials, analogous to a genetic code for materials assembly. The sequence and length tunability of nucleic acid bonds has allowed us to define a powerful set of design rules for the construction of nanoparticle superlattices with more than 70 unique lattice symmetries, spanning over one order of magnitude of interparticle distances, with several well-defined crystal habits. Furthermore, this control has enabled exploration of sophisticated symmetry breaking processes, including body-centered tetragonal lattices, Frank-Kasper phases, and a unique triple-double gyroid structure that has no known mineral equivalent. The nucleic acid bond can also be programmed to respond to external biomolecular and chemical stimuli, allowing structure and properties to be dynamically tailored. Notably, this unique genetic approach to materials design affords functional nanoparticle architectures that can be used to catalyze chemical reactions, manipulate light-matter interactions, and improve our fundamental understanding of crystallization processes.

Dr. Chad A. Mirkin is the Director of the International Institute for Nanotechnology and the George B. Rathmann Professor of Chemistry, Chemical and Biological Engineering, Biomedical Engineering, Materials Science & Engineering, and Medicine at Northwestern University. He is a chemist and a world-renowned nanoscience expert, who is known for his discovery and development of spherical nucleic acids (SNAs) and SNA-based biodetection and therapeutic schemes, Dip-Pen Nanolithography (DPN) and related cantilever-free nanopatterning methodologies, On-Wire Lithography (OWL) and Co-Axial Lithography (COAL), and contributions to supramolecular chemistry and nanoparticle synthesis. Mirkin received his B.S. degree from Dickinson College (1986) and a Ph.D. degree from the Penn State University (1989). He was an NSF Postdoctoral Fellow at the MIT prior to becoming a professor at Northwestern University in 1991. He has authored over 790 manuscripts and over 1,200 patent applications worldwide (over 360 issued) and founded multiple companies, including AuraSense, Exicure, TERA-print, and Azul 3D. Mirkin has been recognized with over 230 national and international awards, including the Kabiller Prize in Nanoscience and Nanomedicine, the SCI Perkin Medal, the Wilhelm Exner Medal, the RUSNANOPRIZE, the Dan David Prize, and the Sackler Prize in Convergence Research. He served for eight years on the President's Council of Advisors on Science & Technology, and he is one of very few scientists to be elected to all three US National Academies. Mirkin has served on the Editorial Advisory Boards of over 20 scholarly journals, and he is the founding editor of the journal Small. At present, he is an Associate Editor of JACS and a PNAS Editorial Board Member. He has given over 740 invited lectures and educated over 290 graduate students and postdoctoral fellows, of whom over 110 are now faculty members at top institutions around the world.

Please see the KNI Distinguished Seminar Series webpage for updates on future speakers as well as links to recordings of previous seminars.