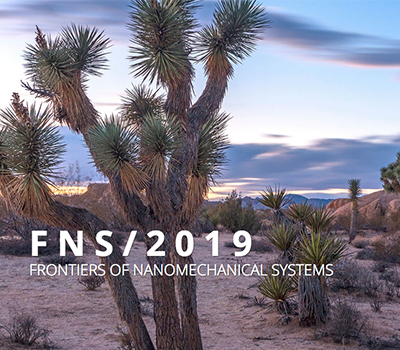 International workshops on the frontiers of nanomechanical systems

Frontiers of Nanomechanical Systems workshops serve to bring together the international research community engaged in fundamental research on micro- and nano- electromechanical systems (MEMS & NEMS). These are “working” meetings intended to promote the cross-fertilization of ideas, approaches, and techniques in this rapidly-developing area. Nanomechanical systems have emerged as a versatile platform for fundamental science and applications; they are well-controlled, interrogatable, and well-characterized, and fill in the gap between the microscopic world of molecular vibrations and the world of macroscopic vibrational systems. The research frontiers they open lie at the interface between quantum & classical nonlinear dynamics and extend from condensed matter physics to statistical physics, many-body physics far from thermal equilibrium, and nanotechnology.

In February 2017, we organized the first international conference on the frontiers of nanomechanical systems. Held in the Italian Alps, FNS/2017 encompassed the breadth and the promise of the field, led to establishing a common language amongst participants, pointed to new research directions, and resulted in new collaborations. It succeeded in bringing together researchers from academia and industry and introduced young researchers to the global scientific community engaged in nanomechanics. (Details about the first workshop can be found at http://fns-conference.org.) The widely acclaimed success of this first meeting and the cross-disciplinary nature of the area has led us to work toward holding such meetings biennially. At the second FNS convergence this coming February, networking and open discourse will again be achieved through scientific talks, poster sessions, and informal discussions. Throughout its three and one-half days, FNS/2019 will comprise a single-session scientific program. We especially welcome graduate students and postdocs to become active participants in this workshop.