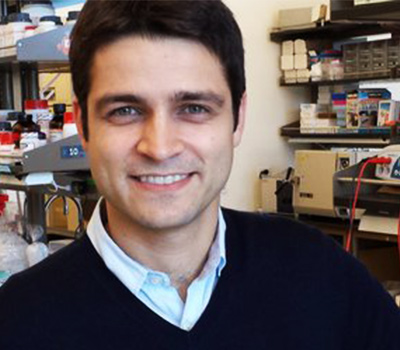 Mikhail Shapiro, professor of chemical engineering and an investigator with the Heritage Medical Research Institute, has been awarded a $1 million grant from the Chan Zuckerberg Initiative (CZI) to fund his research into acoustic biosensors—genetically engineered protein structures that allow ultrasound imaging of genetic and protein activity in cells within living organisms.

Shapiro's work broadly investigates ways of imaging and manipulating cells and tissues within the body through the use of ultrasound and magnetic resonance. Ultrasound imaging has been, until recently, limited to the observation of anatomical structures. Shapiro, however, has discovered a way to use microscopic protein bubbles (gas vesicles) normally found in bacteria as a sort of ultrasound "light bulb" that allows researchers to observe gene expression and protein activity inside a cell using sound waves.

"Just as fluorescent proteins revolutionized the way cells are studied under an optical microscope, we hope our work on acoustic proteins will create new ways to study cellular function deep inside intact, living, breathing organisms and, someday, patients," Shapiro says.

The grant from the Chan Zuckerberg Initiative will allow Shapiro to expand on this research.

"CZI is an amazing community of multidisciplinary researchers," he says. "Getting this support and becoming part of their network of investigators will help us accelerate our science and apply it to a wider variety of biological problems."

The Chan Zuckerberg Initiative is a philanthropy founded in 2015 by Priscilla Chan, a pediatrician and philanthropist, and her husband, Mark Zuckerberg, founder and CEO of Facebook. CZI is promoting the use of technology to help solve challenges that include eradicating disease, improving education, and reforming the criminal justice system.

Shapiro, who joined the Caltech faculty in 2014, received a Packard Fellowship and a Pew Scholarship in 2016, and was named a Camille Dreyfus Teacher-Scholar in 2018. He received the Vilcek Foundation Prize in 2019. He is an affiliated faculty member of the Tianqiao and Chrissy Chen Institute for Neuroscience and Kavli Nanoscience Institute.