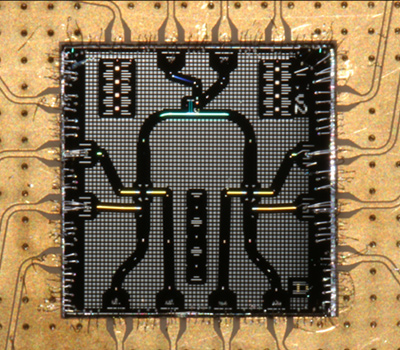 In 1946 Edward M. Purcell was the first to realize that an atom itself does not possess sole authority over the way in which it emits radiation; rather, the electromagnetic environment an atom is placed within can induce strong modifications as well. Purcell’s particular interest was in how the intrinsic magnetic moment (spin) of atomic nuclei in solids and liquids could be measured. It was known at the time that when atoms are placed in a magnetic field, emission and absorption of radio frequency (RF) waves could be induced between different nuclear spin levels of the atoms. Estimates of the nuclear spin radiative emission rate, however, indicated that the radiative relaxation rate would be very, very slow (on the order of 1022 seconds, or 10,000 times the age of the universe). Purcell and colleagues R. V. Pound and H. C. Torrey found that placing atoms inside a resonant RF circuit could dramatically increase the nuclear spin radiation rate to minutes, allowing for the practical measurement of nuclear magnetic moments in different materials. In 1952 Purcell was jointly awarded the Nobel Prize in Physics for his work on nuclear magnetic resonance (NMR).

Ultimately, these and other techniques led to the development of magnetic resonance imaging (MRI), a popular medical technique for creating high resolution images of internal anatomy (if you’ve ever had a sports injury you probably know all too well about MRI machines). In the 1980s, scientists realized that the power of the “Purcell effect” could be applied to optical radiation and optical devices. These ideas are part of a larger body of work, led by pioneers such as Caltech physicist Jeff Kimble, to study the quantum properties of single atoms and single photons – the small quantized energy packets of radiation – in a field that is called cavity quantum electrodynamics (QED).

It turns out that an ensemble of atoms can yield modified radiative phenomena all by themselves. Two types of photon-mediated interactions arise between the atoms. One such interaction involves the exchange of real photons, which leads to effects such as Dicke superradiance where atoms emit radiation in a unified manner, resulting in a faster emission rate. There are also virtual photon processes involving the emission and reabsorption of light, with the photon only existing as a virtual intermediary. Virtual photon exchange leads to a renormalization of the ground state of the atomic ensemble, known as the collective Lamb shift; its role in non-trivial dynamics of the atomic ensemble is typically obscured by the rapid decay associated with superradiance.

In recent work from the Quantum Photonics group at Caltech and collaborators at the Institut de Ciencies Fotoniques (ICFO), researchers have created an analogous system to the atomic ensemble in an open radiation environment. The team, led by Oskar Painter, John G. Braun Professor of Applied Physics and Professor of Physics at Caltech, utilized a system composed of artificial atoms formed from engineered transmon qubits. Transmon qubits are superconducting elements with persistent electrical states that mimic the internal states of an atom.  Through channeling of the microwave radiation emitted by transmon qubits into a special guiding structure (a co-planar waveguide), and precise placement of the qubits along the waveguide, the Painter-led team was able to control qubit radiative decay and observe coherent dynamics of the interacting qubits resulting from the exchange of microwave photons via the waveguide.

The resulting dynamics can be described in certain limits (low excitation level) as a cavity QED system much like that explored by Purcell. Though unlike in Purcell’s case, here the microwave cavity is emergent, resulting from the collective photon-mediated interactions of the qubits, and consists of a special collective state of the qubit array which is dark to the waveguide. This sort of structure has been dubbed a “magic cavity” as its mirrors are individual atom-like qubits and the quantum entanglement of the mirror qubits are what give rise to its special dark state properties.

The team has also gone on to explore some of the quantum properties of the magic cavity. For instance, under low-light level excitation (single photon level and below) the qubits of the cavity act like near perfect mirrors, strongly reflecting microwave signals. Putting just a single photon of energy into the emergent magic cavity changes everything. In this state the qubit mirrors act transparently to incoming signals, letting microwave light through the waveguide as if they weren’t there at all. Attempting to put more than one photon in the magic cavity turns out to be a tricky business; theoretically the photons in a dark state tend to spatially arrange themselves so as to avoid each other, similar to the way electrons behave due to the Pauli-exclusion principle.

The magic cavity represents a small – but significant – step towards realizing more complex and powerful open quantum systems of light and matter, so-called Quantum Photonic Matter. In particular, the work opens up new means for synthesizing highly entangled quantum states of microwave-frequency light and paves the way for exploiting correlated dissipation and decoherence-free subspaces of quantum emitter arrays for universal quantum computation, or more generally, to the study of the many-body dynamics of large quantum spin chains.

Above: Optical image of the “magic cavity” superconducting quantum circuit (SQC) chip. The central chip is fabricated from a silicon substrate, and incorporates Aluminum metal layers which are superconducting at the measured temperature of approximately 10 milliKelvin. An external printed circuit board and microwave connectors (exterior part of the image) are used to send and receive microwave signals to the SQC. The reflective blue region near the middle top of the chip is where the probe qubit resides, with the mirror qubits on both left and right sides of the chip. A connecting co-planar waveguide winds between all qubits (dark upside down U-shape in the image).