Thinner than a human hair, new material can absorb impacts from microparticles traveling at supersonic speeds. 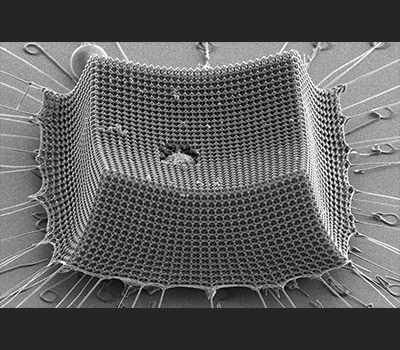 Engineers at Caltech, MIT, and ETH Zürich have developed a nano-architected material made from tiny carbon struts that is, pound for pound, more effective at stopping a projectile than Kevlar, a material commonly used in personal protective gear.

Pioneered by Caltech materials scientist Julia R. Greer, nano-architected materials have a structure that is designed at a nanometer scale and exhibit unusual, often surprising properties—for example, exceptionally lightweight ceramics that spring back to their original shape, like a sponge, after being compressed.

"The knowledge from this work could provide design principles for ultra-lightweight impact resistant materials for use in efficient armor materials, protective coatings, and blast-resistant shields desirable in defense and space applications," says Greer, the Ruben F. and Donna Mettler Professor of Materials Science, Mechanics and Medical Engineering, whose lab led the material's fabrication. Greer is co-corresponding author of a paper on the new material that was published in Nature Materials on June 24.

The material, which is thinner than a human hair, consists of interconnected tetrakaidecahedrons made out of carbon struts that have been formed under extreme heat (known as pyrolytic carbon). Tetrakaidecahedrons are structures with 14 faces: six with four sides and eight with eight sides. They are also called "Kelvin cells" because, in 1887, Lord Kelvin (physicist William Thomson, 1st Baron Kelvin, in whose honor we state absolute temperatures in units of "Kelvin") suggested that they would be the best shape to fill an empty three-dimensional space with equal-sized objects using minimal surface area.

"Historically this geometry appears in energy-mitigating foams, says Carlos Portela (MS '16, PhD '19), assistant professor of mechanical engineering at MIT and lead/co-corresponding author of the Nature Materials paper. Portela and his lab investigated the use of the foam-like structures to lend flexibility to the stiff carbon. "While carbon is normally brittle, the arrangement and small sizes of the struts in the nano-architected material gives rise to a rubbery, bending-dominated architecture," he says.

While the strength of nano-architected materials has been studied using slow deformation (compression and tension, for example), Portela wanted to know how such a material might survive a high-speed impact.

While a postdoc at Caltech in the Greer lab, Portela first fabricated the material out of photosensitive polymer using two-photon lithography, a technique that uses a fast high-powered laser to solidify and sculpt microscopic structures. His team then pyrolized the structures; that is, they burnt them in a furnace at a very high temperature to convert the polymer to pyrolytic carbon. The scientists created two versions of the material: a denser and a looser one. Portela's lab then blasted both versions with 14-micron-diameter spherical silicon oxide particles, one at a time. The particles traveled at between 40 and 1,100 meters per second; for reference, the speed of sound is 340 meters per second.

The researchers found that the denser version of the material was more resilient, with the microparticles tending to embed in the material rather than tearing straight through, as would be the case with either fully dense polymers or carbon sheets of the same thickness. Under closer examination, they discovered that individual struts directly surrounding the particle would crumple, but the overall structure remained intact until the projectile stopped. Pound for pound, the new material outperformed steel by more than 100 percent and Kevlar composites by more than 70 percent.

"We show the material can absorb a lot of energy because of this shock compaction mechanism of struts at the nanoscale versus something that's fully dense and monolithic, not nano-architected," Portela says.

For the material to be used in real-world applications, researchers next will need to find ways to scale up its production and to explore how other nano-architected materials, including those made out of materials other than carbon, hold up under high-speed impacts. In the meantime, the study has demonstrated the viability of nano-architected materials for impact resistance, opening up a new avenue of research.

The Nature Materials paper is titled "Supersonic Impact Resilience of Nanoarchitected Carbon." Co-authors include Caltech former graduate student Bryce Edwards; David Veysset, Yuchen Sun, and Keith A. Nelson of MIT's Institute for Soldier Nanotechnologies and department of chemistry; and Dennis M. Kochmann of ETH Zürich. This research was supported in part by the Office of Naval Research, the Vannevar Bush Faculty Fellowship, and the U.S. Army Research Office through the Institute for Soldier Nanotechnologies at MIT.