The Nadj-Perge group and collaborators have generated an image of the magic angle that exists when two sheets of graphene are slightly twisted. 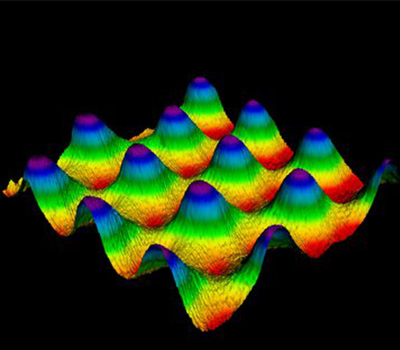 Recently researchers at MIT made a fantastic discovery when they stacked sheets of graphene slightly offset from one another, around 1.1 degrees. At this angle, graphene electrons yield unique and potentially game-changing properties.

Assistant professor of Applied Physics and Materials Science Stevan Nadj-Perge and his group have taken this discovery a step further by generating an image of the atomic structure and electronic properties of magic angle-twisted graphene.

"When two layers of graphene are rotated relative to each other, electrons become localized at specific places in the crystal and give rise to a periodic height profile. The periodicity of this so-called Moiré pattern is set by the rotation angle and at the magic angle (around 1.1˚). For this rotation angle, the correlation effects between electrons are maximized."

Read more about the group's work in the Caltech article, "Finding the Magic in the Magic Angle".