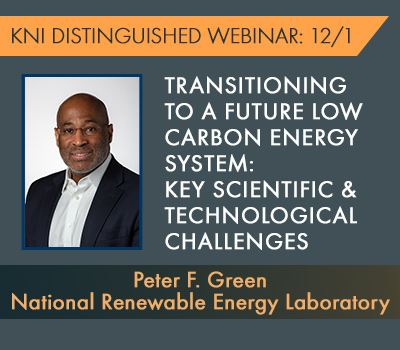 This event has passed. Watch the seminar recording here.

During the next two decades, in the absence of appropriate actions, global primary energy consumption is projected to increase between 30-50%, by some estimates. This, in part, is associated with inevitable global trends, including growing populations, increasing GDPs, and the ubiquity of distributed energy resources (DERs) - solar PV, electric vehicles, batteries, smart appliances, LEDs, sensors and smart buildings. In order to address decarbonization challenges associated with power generation from the current fossil fuel based energy system, a future energy system should not only provide power primarily from low carbon energy sources (e.g.: renewables, nuclear, hydrogen), but enable carbon dioxide capture and utilization (producing chemicals, fuels and materials). Additionally, this future energy system must be able to monitor and control, real-time, millions of DERs, in a manner that is secure, reliable, resilient, efficient and cost effective. In order to accommodate the transition, key scientific and technological advances must be accomplished. For example, advances in science, technology and manufacturing must be made to for continued cost reductions, and increases in generation capacity, of renewable power generated by solar, wind, hydro and geothermal sources. Various technologies for energy storage with varying duration capacities -minutes, hours, days, months - must be further developed. An overview of the status and prospects of key science and technology challenges associated with the energy transition will be discussed.

Peter F. Green is the deputy laboratory director for Science and Technology and the chief research officer for the National Renewable Energy Laboratory, Golden CO. After spending eleven years at Sandia National Laboratories, where he began his professional career in 1985, Green moved to The University of Texas-Austin, where he became the B.F. Goodrich Endowed Professor of Materials Engineering and a professor of chemical engineering. In 2005 he was recruited to the University of Michigan to become chair of the Department of Materials Science and Engineering; he was also the Vincent T. and Gloria M. Gorguze Endowed Professor of Engineering, as well as professor of chemical engineering, applied physics, and macromolecular science and engineering. He also served as the director of a DOE Energy Frontiers Research Center: Center for Solar and Thermal Energy Conversion.

Green's prior leadership experience includes serving as president of the Materials Research Society (MRS). He is a fellow of a number of societies: MRS, American Physical Society, American Ceramics Society, Royal Society of Chemistry, and the American Association for the Advancement of Science. Other recognitions include inaugural editor in chief, MRS Communications; National Science Foundation Creativity Extension Award; formerly divisional associate editor, Physical Review Letters; and "Outstanding Referee" for the Journals of the American Physical Society.

Green earned both B.A. and M.A. degrees in physics from Hunter College and doctorate in materials science and engineering from Cornell University.