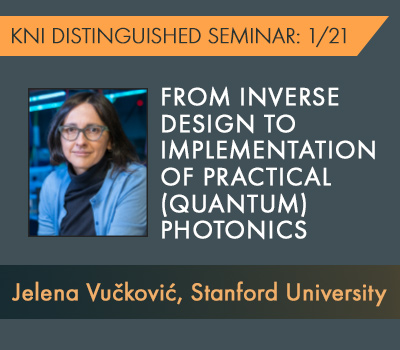 This event has passed. Watch the full seminar recording on the KNI YouTube channel here.

Combining state of the art optimization and machine learning techniques with high speed electromagnetic solvers offers a new approach to "inverse" design and implement classical and quantum photonic circuits with superior properties, including robustness to errors in fabrication and environment, compact footprints, novel functionalities, and high efficiencies. We illustrate this with a number of demonstrated devices in silicon, diamond, and silicon carbide, including wavelength and polarization splitters and converters, power splitters, couplers, nonreciprocal switches and routers, on chip laser driven particle accelerators, and efficient quantum emitter-photon interfaces.

Jelena Vučković is the Jensen Huang Professor in Global Leadership in the School of Engineering, a Professor of Electrical Engineering and by courtesy of Applied Physics at Stanford, where she leads the Nanoscale and Quantum Photonics Lab. She is also a director of Q-FARM, Stanford-SLAC Quantum Science and Engineering Initiative, and is affiliated with Ginzton Lab, PULSE Institute, SIMES Institute, Stanford Photonics Research Center (SPRC), SystemX Alliance, and Bio-X at Stanford.

Upon receiving her PhD degree from Caltech in 2002, she worked as a postdoctoral scholar at Stanford. In 2003, she joined the Stanford Electrical Engineering Faculty, first as an assistant professor, then an associate professor, and finally as a professor of electrical engineering (since 2013). She has also held visiting positions at the Max Planck Institute for Quantum Optics (MPQ) in Munich, Germany (2019), at the Institute for Advanced Studies of the Technical University in Munich, Germany (2013-2018), and at the Institute for Physics of the Humboldt University in Berlin, Germany (2010-2013).

Vučković has received many awards including the IET A. F. Harvey Engineering Research Prize (2019), Distinguished Scholar of the Max Planck Institute for Quantum Optics - MPQ (2019), Hans Fischer Senior Fellowship from the Institute for Advanced Studies in Munich (2013), Humboldt Prize (2010), Marko V. Jaric award for outstanding achievements in physics (2012), DARPA Young Faculty Award (2008), Chambers Faculty Scholarship at Stanford (2008), Presidential Early Career Award for Scientists and Engineers (PECASE in 2007), Office of Naval Research Young Investigator Award (2006), Okawa Foundation Research Grant (2006), and Frederic E. Terman Fellowship at Stanford (2003). She is a Fellow of the American Physical Society (APS), of the Optical Society of America (OSA), and of the Institute of Electronics and Electrical Engineers (IEEE).

The KNI Distinguished Seminar Series is a new monthly series hosted by The Kavli Nanoscience Institute where eminent scientists and thinkers with strong yet varied backgrounds in nanoscience and nanotechnology share their expertise with the Caltech community. Seminars consist of a one-hour presentation, followed by a Q&A and light reception. The scopes of presentations may range from: recent outstanding scientific highlights/technological advancements, to innovative early-stage research developments, to broader cross-disciplinary topics that are relevant to nanoscience. Each seminar will be recorded and made available to the public via the KNI's YouTube channel.