A Look at the First Cohort of KNI Laboratory Resident Experts

Recapping the experiences and fruitful outcomes of the KNI Lab's first cohort of Resident Experts. 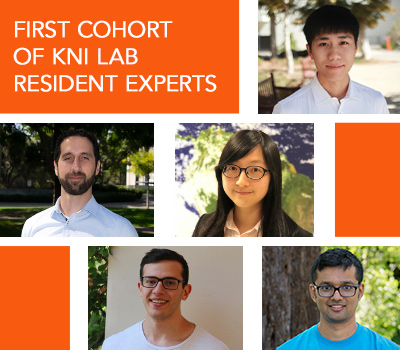 In October 2019, the KNI formally launched an initiative dedicated to expanding and standardizing technical and educational resources that directly benefit our lab members. This program is comprised of KNI Laboratory Resident Experts (REs), a small cohort of staff-nominated researchers, who translate their expertise in various lab areas into concrete process recipes and documentation. These valuable resources are then made available to users and posted online for the general nanoscience community to use as reference points. Working with the technical staff, our Resident Experts were given a more in-depth look at the lab from a non-user standpoint, further expanded their knowledge of KNI instrumentation, and provided additional ideas to enhance the lab’s utility for our users. Our first cohort of REs just wrapped up their six-month term, and here we’re giving an overview of what was accomplished.

Resident Expert in wet chemistry & optical lithography Dvin Adalian is one of the longest-standing lab members of the KNI, having joined in 2010. Over the past decade, Dvin accumulated a wealth of specialized knowledge that extends well beyond his specific RE category. During the last six months, Dvin developed and verified several photoresist process recipes and created two important new pages on the KNI Lab wiki: “Optical Lithography Resources” and “Wet Chemistry Resources”. These resources make it easier for new and current lab members to competently make their own photoresist recipes. Dvin’s input also led to the acquisition of a new optical microscope for the chemistry room, which eases the user experience in times when one needs to review his/her samples throughout multiple stages in a process.

Sophia Cheng, Resident Expert in deposition, first joined the KNI five years ago. She gained wide experience across many areas in the lab as a requisite for her research project on the mesoscale design of photoelectrochemical cells for solar fuels generation. During the RE program Sophia contributed TiO2, NbOx, and AlN recipes for the KNI’s newer sputterer tools, as well as recipes and comparisons for Pseudo-Bosch ICP-RIE Etch for SiO2/SiNx and a photoresist recipe on NR9-1000PY. According to Sophia, the Resident Expert program provided her with a better understanding of general fabrication and analysis and increased her knowledge of the suite of deposition tools in the KNI from both an operational and functional standpoint.

Resident Expert in plasma-etch and PECVD Jake Rochman also enjoyed spending more direct time with the staff and which led to a deeper understanding of the inner workings of the lab. Over the past six months, Jake poured effort into developing recipes and characterizing properties of films, which resulted in new recipes for PECVD deposition of amorphous silicon, pseudo-bosch etching of amorphous silicon, a Nb etching recipe, as well as an HSQ electron beam resist recipe that can be used for defining patterns for photonic crystals.

Jash Banker, Resident Expert in lithography, originally joined the KNI because his research project necessitated the use of the EBPGs. Now his extensive knowledge of the EBPGs includes smart fracturing and write order techniques in BEAMER that reduce disorder in patterned microwave resonators – in fact he demonstrated some of the lowest disorder values on record. Over the past several years Jash has expanded his scientific footprint across most areas in the lab. For the Resident Expert program, Jash produced several resources that all EBPG users can employ, including documentation for mounting pieces onto the 5000+ and recovering from loading errors; a BEAMER tutorial with fracturing tips; a recipe on ZEP520 ebeam resist; and more. Also during this time Jash worked more closely with staff and learned higher-level techniques on other tools in the lab, such as the ebeam evaporators and He/Ne/Ga-FIB, which he found helpful for parts of his current research.

Resident Expert in microscopy Changhao Xu spent the last six months creating new resources for utilizing STEM EDS on the TF-20 TEM, parameters for helium ion beam imaging using an electron flood gun, as well as recipes for sputtering SnO2 and Al2O3 etch in ICP and RIE. Over the course of the RE program Changhao honed his capabilities on the full range of microscopes in the KNI, from FIB cross-sectional imaging, to trimer maintenance on the He/Ne/Ga-FIB, to TEM lamella preparation using SEM/FIB. From the direct mentorship with staff and creating new resources, Changhao found the RE experience to be beneficial for his own current and future research endeavors.

The first cohort of KNI Laboratory Resident Experts exceeded expectation in terms of valuable output and overall participation. Each person brought his/her own fresh perspective to the program which allowed it to have an even larger positive impact on our members’ lab experience and their research efforts. On behalf of everyone at the KNI, we are incredibly grateful to Dvin, Sophia, Jake, Jash and Changhao for their consistent, outstanding effort in improving our nanofabrication facilities.

A comprehensive list of KNI standardized process recipes can be found on the KNI Lab wiki, along with a list of all equipment and links to detailed individual pages. The full KNI Lab document library is accessible via Box and includes SOPs, troubleshooting, manuals, process recipes, and more.