Materials Science graduate student Daniel Mukasa is the inaugural recipient of the KNI Catalyst Awards program, which honors scientists for their outstanding commitment to community outreach, diversity, equity and inclusion at Caltech and JPL. 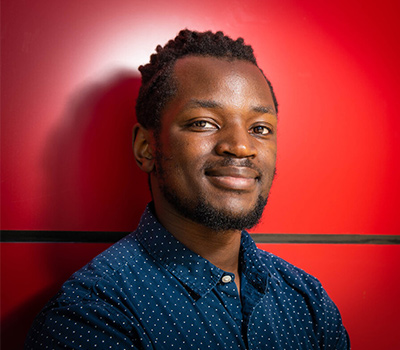 Division of Engineering and Applied Sciences

Daniel Mukasa is a second-year graduate student researcher in Dr. Wei Gao’s group. His research focuses on the understanding of fundamental materials science, using density functional theory and ab initio computational physics calculations, as a means of designing biosensors that analyze small molecules (biomarkers) in sweat. Optimizing the design, function, and reliability of these wearable bioelectronic devices will one day allow for early diagnoses – and, by extension, treatment – of diseases like cancer and diabetes, all from data collected by a person’s sweat droplets.

A native Southern Californian, Daniel grew up in Riverside and was a pole vaulter in high school. He went on to earn his undergraduate degree in physics from Oberlin College in Ohio. During that time, he participated in summer REU programs, including a WAVE fellowship at Caltech with Professor Brent Fultz.

Beyond his scientific pursuits, Daniel has been actively engaged in community building and mentorship at Caltech since he first arrived in 2019. As Vice President of BSEC, Daniel has led several events and co-organized the pivotal BSEC Town Hall meeting for the campus community in June 2020.

During the beginning of the Covid-19 pandemic and in wake of the murders of Ahmaud Arbery, Breonna Taylor, George Floyd, and countless others, BSEC members spent a month preparing the Town Hall where they presented a detailed petition to address issues of racial bias at Caltech and call on the administration to implement reforms in order to build a more diverse and inclusive Caltech. Daniel explains,

“We felt it was necessary to figure out how Caltech can improve and then recruit a more diverse student population, so we identified simple investments, like graduate summer research institutes and recruiting. The number of Black students is going to triple in this most recent graduate student admissions cycle. Small changes really do make a lasting impact.”

The petition, “Anti-Racism: What Can We Do?”, catalyzed many campus-wide conversations and led to the creation of several tangible changes. They include:

Over the past six years, Daniel has steadily worked his way into leadership roles within his community organizations. He strongly advocates for providing his peers and those who come after him with the tools and resources they need for professional development and careers in STEM fields. This includes sharing information on how to get into grad school or REU programs, obtaining a job in industry, the importance of attending and speaking at conferences, publishing articles, and more. Given the very small population of Black graduate students at Caltech, building a supportive network is a priority for Daniel, and he has been happy to see the kind of impact BSEC and its allies can make when everyone works together.

On the topic of leadership, Daniel appreciates his advisor, Wei Gao, for being a very supportive PI. Wei allowed Daniel to take a step back from his research to focus on the Town Hall presentation and campus diversity efforts (and study for finals, which were happening concurrently). This space gave Daniel the ability to return to his research and paper writing refreshed, which ultimately was a win for both student and PI.

When asked what he is most proud of over this past year, Daniel responded:

“I’m most proud of the change in culture. Getting into an institution like Caltech, people have the opportunity to do some of the greatest research, work with some of the greatest scientists on the best equipment, and [it’s easy to only] think of that. Now I’m starting to see, even among my peers, people starting to think of diversity-related work and to use the pedestal that we’re on to help others get to a similar place. And that’s what’s going to change science. Our scientific work is going to push and change the world, but as we get more diversified minds in a space like this, the innovations that we’re going to see are going to be phenomenal, both in terms of the actual science of it, but also in terms of the societal impact. That’s what I’m most excited about – because I think if you can have a lasting cultural change, that is really what’s going to change the world.”

In terms of building and sustaining cultural change at Caltech, Daniel sees the WAVE Fellowships program as a good place to start, both in terms of offering students of color with the opportunity to explore research at Caltech, but also for PIs to mentor and continue to invest in the future of these young scientists, providing them with information on how they can get into top tier research institutes. Daniel noted:

“I’d like to thank Brent Fultz for this – he showed me what it was like to work towards a scientific publication by doing in-depth computational work, in depth experimental work, and seeing what really brings an entire project together. Then told me what grad committees are looking for, and what you should be doing when you go back to school.”

The results of Daniel’s diversity and inclusivity efforts on campus have generated a profound impact at Caltech, and he is excited to see what the campus environment will look like by the time he graduates. As for a longer outlook, Daniel plans to continue with his passion in biomedical research and wants to see a device he’s helped create save lives. He hopes to become a professor at Caltech or another university in California, where he can pursue his scientific goals and continue to be involved in diversity work.

Read about our other inaugural KNI Catalyst Award winner Haley Bauser and the award program here.