KNI Wraps Up Its Second Year of SURF-the-WAVE

We sat down with our second cohort of KNI SURF-the-WAVE fellows and caught up on their summer experience "at" Caltech. 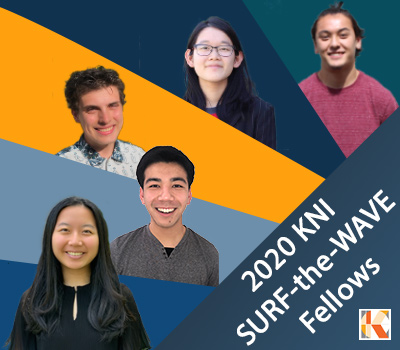 The KNI recently wrapped up its second year of the SURF-the-WAVE program for summer undergraduate research fellows. Our five fellows dove into vastly different projects, ranging from optical metasurfaces, to focused ultrasound techniques on the blood brain barrier, to scorpion exoskeleton microstructures, and more. In case you missed it, you can read our earlier introductory article on each fellow here.

This summer our cohort was challenged in unique ways, not only by their rigorous research projects, but also by having to carry out their projects in a 100% remote environment due to the COVID-19 pandemic. A testament to their resolve and resiliency, all five fellows completed their projects with a remarkable amount of positivity and grace. Over the course of the ten-week period, our SURF-the-WAVE fellows participated in regular webinars and Q&A sessions with faculty mentors, key technical Caltech staff, and graduate students & postdocs, where they learned about different research directions, post-graduate career paths, and the graduate school application process. Learn more about our extraordinary SURF-the-WAVE fellows below.

Christina Lee is a rising senior in biophysics at Columbia University, where she has participated in research on conductive DNA wires that self-assemble into nanoelectronics devices, as well as expansion microscopy on human brain tissue and the evolution of small heat shock proteins. Christina’s interest in the mysteries of the nervous system and neuronal activity led her down an exciting path of research at Columbia, Oxford and now Caltech. Over the course of this summer, she worked in Professor Mikhail Shapiro’s group with co-mentor Richard Li on another neuroscience-related project, entitled “Implementation of Acoustically Targeted Chemogenetics (ATAC) in Mice and Nonhuman Primates”, wherein non-invasive focused ultrasound is applied to open the blood brain barrier and transduce neurons with virally encoded engineered receptors – a process known as acoustically-targeted chemogenetics. Equipped with a new set of instructions, neurons are then able to respond to an administered drug treatment for neurological disorders.”

While the ultimate purpose of this technique is for human benefit, many steps must be taken beforehand to prove its safety and efficacy. Christina worked with her co-mentor to analyze the lowest possible ultrasound pressure that could be applied with successful results. Although she worked 100% remotely this summer, Richard walked her through his detailed procedures in the lab so that she could follow along and clearly understand his process. This was Christina’s first experience with being in a STEM-only summer research program. “It was really nice to be in a community of students who really cared about what they do”, she commented. Christina also enjoyed the set schedules of lectures and webinars in the KNI SURF-the-WAVE and general SURF program: “I never thought much about startups or policy making… [this experience] opened my eyes to other [career] possibilities and research disciplines.” Christina’s work over the summer has continued to spur her passion for neuroscience and exploring the cross-section of biology and physics.

During the ten-week period, Lucas created 3D models of these structures for finite element method (FEM) simulations. The constraints of carrying out a remote project caused some initial technical obstacles for Lucas, but once he was able to get everything sorted out, he quickly learned how challenging the modelling aspect of research can be. “There’s a difference between the kind of materials science or mechanics work that you do in the classroom and the level to which people apply it for research. When you’re modelling, you really need to understand how each of the models you’re using are accurately representative and also what assumptions they’re making and what limitations they may have”, he explained. “There was a lot of learning in the process to realize how each of these different concepts work together to the assumptions and outputs we were getting. The whole modeling process was super revealing in realizing the mathematical complexity when you’re trying to be careful about the techniques you’re using.” Lucas was tasked with generating 3D models of structures with tens of thousands of fibers cut in different ways needed to be converted into high quality meshes for analysis. His co-mentor Jane Zhang provided valuable insight into the artistry involved in the scientific process and how to work around the limited understanding of natural structures. He particularly appreciated the weekly check-in meetings where he presented his step-by-step process that required him to formalize and communicate his methodology. These new skills will undoubtedly benefit Lucas in his next research and engineering pursuits.

Brandan Taing is a rising junior at UCLA where he is studying chemical engineering. During his time there, Brandan has carried out research on metal fluorides for the use in lithium-ion batteries, while also staying active in social academic organizations like the United Khmer Students club and his local chapter of the American Institute of Chemical Engineers where he organizes outreach and professional development activities. His prior work on Li-ion batteries was a nice lead in for his summer research in Professor Julia R. Greer’s group, where he worked on a project entitled, “Simulation of Battery Cycling of Different Electrode Architectures Using Porous Electrode Theory.” Brandan maintains an interest in energy storage and seeks to investigate the fundamental structure and transport of lithium ions for their ultimate widespread use in electric vehicles, smart grid systems, and other sustainable energy sources.

Brandan’s summer project involved analyzing the size effect of lithium ions and varying architectures within electrodes to increase their robustness and reliability. For his remote project, Brandan focused on assembling and editing parameters for multiple electrode architectures, then applying those parameters in pseudo-2D model to simulate cycling behavior of lithium-ion batteries. His ultimate aim was to identify optimal conditions for lithium-ion batteries through his modeling. Working with co-mentor Kai Narita, Brandan determined which parameters to focus on, some yielding much different results than expected. Through modelling and simulations, Brandan was exposed to a new, challenging side of research. He saw firsthand how “research is a continual process and often you don’t get the results you want, and you need to invest more time to try to observe why and understand what issues you’re facing.” Apart from the new technical skills he gained, Brandan found his SURF-the-WAVE experience rewarding in other ways: “before SURF, I wasn’t 100% sold on grad school but seeing the multiple careers that you can pivot to after your graduate school career was really great for me to hear.”

Rachel Tham is a senior studying materials science and engineering at University of Illinois at Urbana-Champaign. She has been involved in several activities: she is an academies director for MakerGirl, a STEM nonprofit that works with elementary school-aged girls to teach 3D printing, and she has spent time in the lab characterizing threading dislocation densities of multijunction III-V photovoltaics for the optimization of renewable energy materials. Rachel has maintained a longstanding interest in renewable energy, which led her to join Professor Harry A. Atwater’s research group this summer and work on a project called “Highly Efficient, Two-dimensional Transition Metal Dichalcogenide (TMDC) Emitters for Luminescent Solar Concentrator (LSC) Photovoltaics.” With her co-mentor David Needell’s guidance, Rachel focused on the physics of TMDCs and modelling potential TMDC-LSC devices. LSCs are comprised of luminophores that absorb incident light and remit the light onto a coupled solar cell. By maximizing the amount of light focused onto the solar cell, higher device efficiencies can be achieved with lower manufacturing cost. Using the Monte Carlo ray-trace model, Rachel analyzed the performance of TMDC-LSCs, looking at key metrics, such as optical efficiency, concentration factor, and power conversion.

Over the summer, Rachel finessed her research skills, from picking up better coding habits to practicing more nuanced literature review and directly asking for feedback or help. This summer was particularly valuable for Rachel in that she was “able to access graduate student mentors who have similar interests in photovoltaics that helped personalize [her] path going towards grad school.” Additionally, the research project “broadened my perspective on photovoltaics and photovoltaics as a subset of light-matter studies,” she explained. Rachel looks forward to continuing the investigation of renewable energy solutions in graduate school.

Evan Yamaguchi is a rising senior studying physics at University of Maryland, College Park. During the past few years, Evan has taken part in fabricating 2D van der Waals devices as well as analyzing a mechanism in the K-Ras gene for peptide inhibitors for cancer research. While he had planned on a fabrication-heavy summer with Professor Andrei Faraon’s group, he and his co-mentors Hyounghan (Han) Kwon and Tianzhe (Terry) Zheng pivoted his project into one where he designed resonant metasurfaces to engineer an optical device with full phase and polarization control. His project was entitled, “Engineering Resonances in Nanophotonic Structures.” Over the ten-week period, Evan designed a one-dimensional silicon bar lattice with wavelength and bandwidth control that could be applied to voltage selective NEMS optical filters and achieve different optical filtering wavelengths. This project was particularly appealing to Evan in that it has direct applications in optical technologies such as cameras and filters, biosensors, and augmented reality.

His experience this summer expanded his approach to research in that he now considers potential applications first. In working with the Faraon group, he gained “exposure to different application-oriented projects and the thought processes in designing them,” he explained. Moreover, Evan was able to glean new skills through Han and Terry’s mentoring. He engaged in weekly meeting with his co-mentors, who would assign mini projects on the new software he was using and had him present on concepts he learned during the week. The practice of presenting technical work is one he finds particularly useful as he continues performing scientific research in graduate school.

It was a pleasure getting to know Christina, Lucas, Brandan, Rachel and Evan this summer and learning about their research projects. We wish our SURF-the-WAVE fellows great success in their next year of college (whether it’s remote or in-person) and cannot wait to see what news paths they carve for themselves in the future.