KNI SURF-the-WAVE Fellows and Their Summer at Caltech

The first cohort of KNI SURF-the-WAVE Prize Fellows wrapped up their summer projects at Caltech. 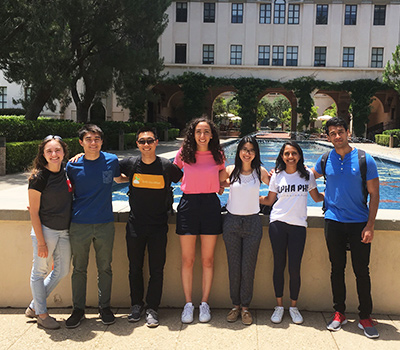 In late August, the KNI wrapped up the first year of its SURF-the-WAVE Prize Fellowships program, an initiative that supports selected undergraduates who conduct nanoscience-related summer research projects at Caltech. In collaboration with the office of Student-Faculty Programs, the KNI SURF-the-WAVE Fellowships program provides mentorship and full access to the KNI Laboratory for those whose projects required the use of a cleanroom facility.

Our inaugural cohort consisted of seven bright, captivating young scientists from various backgrounds and universities; learn more about our fellows’ research projects and their summer experiences at Caltech:

Aziza Almanakly came to Pasadena from New York City, where she is entering her senior year at Cooper Union. There she studies Electrical Engineering and participates in a device fabrication research project through the City College of New York. When she first arrived at Caltech, Aziza remarked that she felt a bit of culture shock being immersed in the campus’s colorful landscape of purple-flowered trees and a community of “genuinely nice people who love talking about science.”

This summer, Aziza worked in Oskar Painter’s research group with graduate student co-mentors Eun Jong Kim and Sherry Zhang on a superconducting circuit design optimization project that incorporated Josephson-junction-based qubits. She created simulations for a new flux bias line with the goal of optimizing the coherence times of superconducting qubits. One of the most challenging aspects of her project was learning how to tackle open-ended problems, the kind where she would resolve one problem only to have a new one pop up in its place. After numerous iterations, Aziza’s final design was one that implemented a band stop filter directly onto the flux bias line to contain the qubit’s energy, which would prevent decoherence and eliminate the dependence of the coherence times on the geometry of the flux bias line.

Over the course of the ten-week program, Aziza proved to herself that she was able to tackle a research problem on her own. She also learned to not compartmentalize different fields of science; blending together elements of physics and engineering, instead, often resulted in better ideas for her project. Aziza plans to go on to graduate school to continue working in research.

Abigail (Abby) Carbone is a senior at North Carolina State University and majors in Materials Science & Engineering. During the academic year, Abby works as a staff microscopist at her university’s multi-user materials characterization facility, where she is the first undergraduate to hold this position.

This summer, Abby joined Harry Atwater’s research group and worked with co-mentor Eowyn Lucas on a project to investigate the structural effects on electrochemical activity of nanoporous Cu thin film catalysts for carbon dioxide reduction. Her main research goals were to quantify structure–property relationships of nanoporous copper catalyst electrodes for carbon dioxide reduction and to explore the possibility of engineering its structure to selectively generate desired products.

During the ten-week project, Abby also utilized the KNI’s transmission electron microscope (TEM) to capture high-resolution images and diffraction patterns, allowing her to study the morphology and crystallinity, respectively, of her nanoporous structures.

A self-described extrovert, Abby shared that she was initially nervous when she arrived at Caltech; however, that feeling quickly dissipated after talking with people who made her feel at home. Her project faced setbacks with inoperative equipment, but she was(?) determined to push through the obstacles by devising alternate plans. During her SURF project, Abby found that she was capable of practicing more independent and analytical research.

Matthew Fu is now a senior at Cornell University in the Applied and Engineering Physics department. Over the last three years, Matthew worked with a research group on various projects from building a vacuum suitcase for the safe transport of samples to device fabrication for testing the plausibility of vertical transport in Strontium Ruthenate 214.

While at Caltech this summer, Matthew worked with Nai-Chang Yeh’s group and the KNI’s Assistant Director of Staff Research, Dr. Matthew Hunt, on a project to measure the amount of damage imparted onto 2D material nanoribbons created by electron beam versus helium ion beam lithography. His objective was to identify which method for 2D material patterning is least damaging, with the end goal of helping to advance the development of high-quality 2D material devices.

Matthew shared that he was proud of how much he was able to accomplish on this project in the ten weeks he was here. He was even able to go beyond his initial research plan and produce simulations for his experiments. This resulted in one of the major highlights of his SURF project: interacting with and learning from William Goddard, professor of Chemistry, Materials Science, and Applied Physics and director of Caltech’s Materials and Process Simulation Center.

Yakub Grzesik is entering his senior year at Rice University where he majors in Electrical Engineering and Physics. In 2017, Yakub participated in an external summer research project that took him to Japan, where he observed and modeled synchronization phenomena in oscillatory systems.

During his SURF project at Caltech, he worked in Professor Andrei Faraon’s lab, where he built upon his knowledge of 2D nanophotonics, metasurfaces and rare-earth materials. Specifically, Yakub investigated single photon emitters (SPEs) made from defects in transition metal dichalcogenides (TMDCs), a type of 2D material, as a means of better understanding how to build and optimize quantum-based technology. Over the ten-week period, Yakub also collaborated with the Nadj-Perge research group on the characterization and fabrication of optical defects in 2D materials, such as WSe2.

Yakub independently developed and established a project that was in its infancy in the Faraon group. When asked what aspect of his project he was most proud of, Yakub answered: “we saw what we were looking for” – SPEs, which could quickly disappear in a matter of seconds

Jacquelyn (Jacqie) Ho is now a senior at Harvard University where she majors in Physics. In addition to her rigorous academic schedule and campus research projects, Jacqie is also the chief executive of the Bach Society Orchestra, Harvard’s undergraduate chamber orchestra.

This summer, Jacqie participated in Caltech's WAVE research program where she joined Professor Nick Hutzler’s lab. She explored atomic and condensed matter research and learned about the physics and experimental techniques involved in building optical traps for laser cooling atoms. Jacqie constructed an athermal Fabry-Perot resonant cavity for frequency-stabilizing lasers, a complex device featuring a quartz tube that was capped on each end by a mirror. Her objective in this project was to achieve proper alignment and ultimately optimize the frequency stability of lasers for high-precision measurements.

Jacqie’s endeavor into this specific device fabrication was a first for the Hutzler lab. As such, her project required a high degree of debugging and problem solving. Throughout her ten weeks at Caltech, she learned more about how valuable collaboration can be, as well as the importance of asking colleagues for advice when she was up against roadblocks. Ultimately, Jacqie’s efforts resulted in the completion of a working system, and she was able to enjoy the satisfaction of creating a functioning piezo scanning cavity that the Hutzler lab can now build upon.

Nidhi Kapate is entering her senior year at the University of Pennsylvania, where she majors in Materials Science and Engineering. She spent the last year working as a research assistant fabricating nanoelectronic devices from 2D materials and performing in-situ TEM characterization on TMDCs. Nidhi also served as the president of the Society of Women Engineers at UPenn.

During her ten-week SURF program at Caltech, Nidhi joined Axel Scherer’s lab and was co-mentored by Dr. Matthew Hunt and the KNI’s Materials Process Engineer, Alex Wertheim. Her research project involved designing, fabricating and measuring the impedance of novel, solid–liquid contacts for in vivo biosensors. The objective was to optimize the architecture of biosensors in order to increase sensitivities and enhance environmental integration. Nidhi utilized instrumentation in the KNI Laboratory to fabricate and measure these structures.

Nidhi’s project was comprised of numerous iterations of fabricating and testing different biosensor structures. By the end of summer, she was pleased to see how much she accomplished in such a short period of time. While at Caltech, Nidhi learned how to take a hypothesis-driven approach in her research and is planning to apply to graduate schools, where she will continue to pursue her education- and science-related goals.

Varun Menon is a rising sophomore and Physics major at UC Berkeley, where he also participates in research projects at Lawrence Berkeley National Laboratory on topological superconductors and magnetic spintronics. When he first arrived at Caltech for the summer, Varun was taken aback by its size. Being much smaller than Berkeley, he was surprised to regularly see the same people on campus day-to-day. He also found Caltech to be “strikingly professional” and noticed how it felt more like a research institution than a university.

This summer, Varun worked in Axel Scherer’s group and was co-mentored by Dr. Hunt. His SURF project built upon an existing collaboration among the Scherer lab, KNI technical staff, and researchers at the University of Manchester that involves a novel resist technology that is imagined for use in extreme ultraviolet photolithography (EUV) techniques for large-scale patterning of integrated circuits. Varun’s project focused on patterning the metal–organic resist using a TEM at 200 keV and a 35 keV helium ion beam, with the objective of determining which technique could yield smaller feature sizes and higher structural aspect ratios. After settling on the helium ion beam as the more practical choice for performing high-resolution lithography, he used it to pursue the fabrication of a plasmonic resonator device that he helped to design.

Although Varun’s SURF experience was compressed into seven weeks, his hyper-determination – and the avid support of his mentor – enabled him to achieve exciting results that he incorporated into his final presentation. Of his many accomplishments throughout the summer, Varun was especially fond of picking up a new skill set that yielded successful device fabrication. His project was entirely different from his previous lab experience, and he learned how to take a more directed, thoughtful approach in his research. As Varun heads into his second year at Berkeley, his new skills will undoubtedly be put to good use.